It is rare to find a French country house with garden statues of the quality and interest of those found at Mesnil Geoffroy.
The park, which is laid out in a formal French style, has three statues and four urns from the time of Louis XIV and Louis XV.
The terracotta statue of a river god (most likely that of the River Seine) is particularly interesting and has recently been restored as part of an on-going programme of work inaugurated by the present owners.

The statue of « La Seine » faces the garden front of the chateau.  The statue is well proportioned, the body is strongly defined and has a well modelled face.  It was badly in need of restoration as the statue was slowly crumbling  and it was necessary to collect the fallen pieces in order to be able to fully restore it.  The decision was taken in 2014 to go ahead with the restoration and the work was carried out by Antoine Rouchet, a restorer based in Granville who also works for the Louvre Museum in Paris.  He was able to confirm that the statue was 17th century and an original work of a very accomplished artist.  Following further research the owners were able to suggest that this representation of a river god could be by Etienne Le Hongre (died 1690).  He sculpted the representation of the River Seine for the Parterre d’Eau at Versailles.  Further work is being undertaken in collaboration with the staff at the archives in Versailles.

Also in the park is a terracotta statue of Venus.  It was sculpted by Allegrain in 1776 and is an original work. 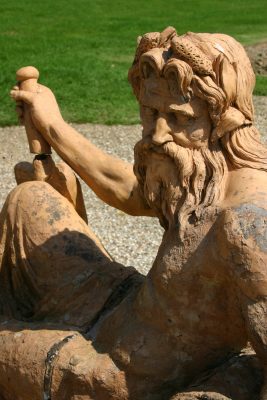 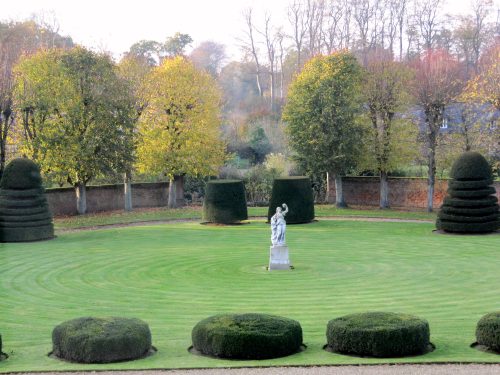 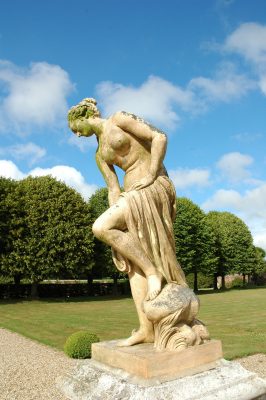